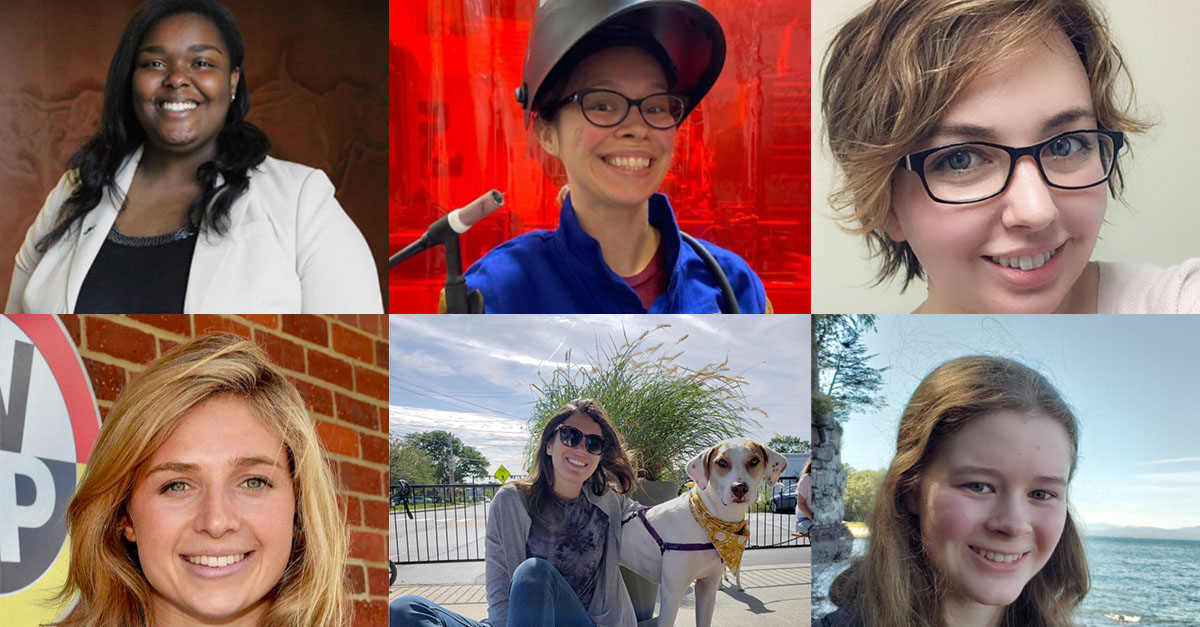 At Benchmark Space Systems, we celebrate the success and value the contributions of a diverse team year-round. We are excited to share this celebration throughout the entire Women's History Month. We embrace diversity in background and thought, as it is critical to the success in aerospace, and pride ourselves on the world-class team we've built so far (and will continue to build in the future!) In the month of March, we are highlighting several women in our organization and the technological advances they have steered. Below is a short Q&A with the women we are spotlighting:

I’ve always loved working with my hands, and my parents have told me about the countless toys I’d dis- and reassemble around the house just to understand their inner workings. Space travel and launch vehicles have been a passion of mine since I was a toddler, but I think the STEM pathway really became visible once I started participating in STEM-related summer camps. These camps gave me a new appreciation of the teamwork and persistence that’s put into a project. The long to design and build structures while working in a team stayed with me all the way through high school graduation, which resulted in me picking Aerospace Engineering as my major!

That was a fact I battled with for 5 long years. In school there was this constant need to prove myself to my peers, to show that I did indeed belong in this field. Even after graduation, I was still questioning my knowledge, skills, and abilities. Upon entering the workforce, I realized I would have to tackle this imposter syndrome head-on to finally accept myself as the engineer that I am. I didn’t really have an industry role model to look up to, no one that looked or thought like me. But this recent self-acceptance has pushed me to be that role model I didn’t have, for the girls and young women who aspire to pave a path alongside mine.

How can we as the new space community become more diverse and celebrate diversity?

I think we, as a whole, must first accept a major industry roadblock in regards to diversity and inclusion: dissonance in academia. Being the “product” of a PWI as a Black woman led me to unique experiences based on my intersecting identities. I have seen the blatant ignorance and cognitive dissonance in academia first hand. I truly believe that designing our learning spaces with the intent of creating a more welcoming and inclusive environment to all students, including those in marginalized and underrepresented groups, would be a great first step as there is an obvious and direct academia to industry pipeline. Maintaining these values as we transition into young professionals is key, as we are the future of the industry. In addition to these efforts, we can celebrate diversity by learning to empathize with the experiences of other people while acknowledging their intersecting identities. This will help promote inclusion, diversity, and respect on multiple levels.

As a kid, I always dreamed of sending things to space or going there myself! I knew that STEM subjects were essential for doing both of those things.

How did you realize you wanted to pursue engineering as a career?

My academic background is in chemistry and physics, rather than engineering. But when I got my first job in the space industry as a propellant chemist, I realized that chemistry alone wasn't enough. I quickly became involved in the engineering department. I still love chemistry but it takes both chemistry AND engineering to make spacecraft work.

Celebrating diversity in STEM careers will inspire untapped talent to join an industry where fresh, innovate perspectives from diverse minds are essential to advancing technology.

How can we as the newspace community become more diverse and celebrate diversity?

It is really important to celebrate and share the stories of diverse role models in the space industry to inspire the next generation of engineers from all backgrounds. It's really difficult to believe that you belong to an industry when you never see anybody else who looks like you or shares similar background to you thriving in that environment.

I am always super proud and excited whenever I see a successful space launch with hardware that I've worked on onboard. Watching rocket launches live will never get old!

I’ve always liked math and science, so I think I knew from a pretty young age that I would enjoy the STEM field. It's interesting, challenging, and presents new opportunities every day!

Diversity of any kind brings new perspectives and opinions which can only help industries grow in a positive way. Coming from a school that was dominated by men (RPI), I’ve grown accustomed to being one of only a few women in a room, but I’m excited to see how that’s changing as more women are entering the field.

I feel so fortunate to be an engineer in such an intriguing and fascinating industry! I’m relatively new in this field, but for the past five months, I’ve grown to really appreciate what BSS is building and find the products I’ve had the opportunity to work on to be pretty amazing! I can't wait to learn more and grow with the company. The space industry is fascinating!

My mom! She has always been so encouraging and empowering and has helped me reach my personal and professional goals. She's my biggest fan!

My proudest moment to date is when I had the opportunity to present my work to a customer and received positive feedback. It was my first time presenting in this industry and I was thrilled with the response.

What are you most excited to learn about next?

Anything and everything! As I said, I’m new to the space industry so I’m learning something new every day and look forward to the projects I will work on in the future. I'm proud to work for a company that is realizing women have also earned the opportunity to succeed and advance in the space world!

How did you realize you wanted to pursue engineering as a career?

I haven't really started a career in engineering yet, but I decided to be a chemical engineering major in college because I am more interested in how to solve everyday problems using chemistry rather than, for example, synthesizing a compound just to make it. I view engineering as how I make traditional lab chemistry more applicable to the problems we're trying to solve.

Growing diversity bring about a positive impact--Considering that the industry is built around complex problem solving, having a group of engineers with different ways of thinking and various backgrounds is essential to solving those problems.

How can we as the newspace community become more diverse and celebrate diversity?

Actively seek out and hire women and gender minorities and BIPOC individuals. Set hiring goals and meet them.

The first time I presented at a research conference was a high point for me. I got to present a project that I had developed from initial problem to solution--with all of the testing in between.  It was a proud moment to take a step back and realize that I had directed the project from beginning to end.

Honestly at this point working in the space industry is just exceedingly cool! When I think about the industry and the work being done I'm in awe, and I'm excited to be a part of that.

My mom - she's a dynamic woman that's whip smart, funny, and the kindest human I know - even though she worked so hard her entire life against much adversity. She's got an amazing sense of humor and from an early age I have always wanted to be just like her (and I still do!)

I've always been passionate about science. In 2nd grade, we had a school science fair and I made my own human space habitat out of recycled2 Lt soda bottles... I think that solidified my destiny! I discovered my passion for physics in high school, which I think is when it started to "click". I narrowed in even further on aerospace engineering in college, and the rest is history!

When our industry realizes that diversity isn't just a buzzword to toss out, we'll see leaps and bounds in growth - both technically and with the advancement of human space settlement in general. Studies have shown that diverse teams lead to higher revenue for companies and better performance in developing new markets. A huge first step for folks looking to improve and foster diverse teams and diverse thought is to focus on becoming allies to people from different backgrounds. It's often left to us to stick up for ourselves and to tackle awkward situations, so please consider speaking up for members of your team.

My proudest moments are on the extreme ends of the career spectrum! Technically, this manifests in my favorite application learned mathematics to the real world. I was in charge of maneuver planning and flying a complicated geostationary spacecraft from LEO to its final home in GEO. I was so proud of that! On the leadership side, I am incredibly proud the knowledge growth in pitching and presenting at incubators, competitions, and even directly to some of the industry's leading tech influencers. These opposites ends of professional growth have laid the groundwork for an awesome career!

Probably in middle school when we were asked to build a “balloon car” and I, interpreting the brief loosely, spent the week figuring out how to build a chassis durable enough to strap a bottle rocket to.

Being an engineer in this industry at this point in history means having a chance to be a part of deciding how space will be used by future generations of humanity. As near space transitions from a domain acted in and upon solely by massive government entities to an area accessible to millions of smaller groups, and even individuals, we have an opportunity to guide space utilization toward sustainable, democratic, and conscientious stewardship of our skies.

How can we as the new space community become more diverse and celebrate diversity?

My wife! She reminds me that for all the cool toys we might put in space, the most important things are still here on earth.

Holding the first propulsion system I led mechanical design on in my own two hands after months of it existing only as electrons on a screen!