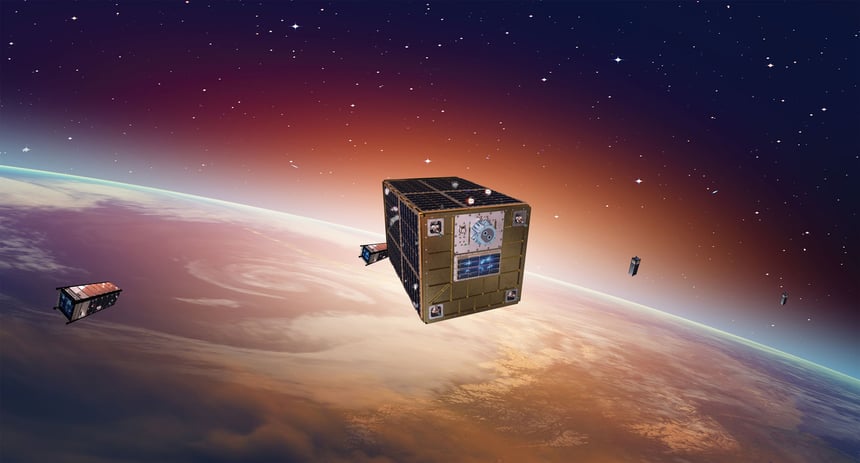 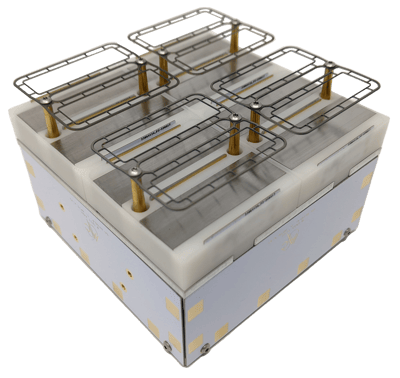 The Xantus metal plasma thrusters, which can single-handedly address most cubesat missions, will be an integral tool for microsat mission optimization with high-endurance ‘cruise control’ functionality for station keeping, mission extension, and ultra-precise pointing operations.

Benchmark’s technology and product roadmap leads to a prominent role in future On-Orbit Servicing, Assembly and Manufacturing (OSAM) operations, where AASC’s MPT technology will support in-space proximity and docking operations. The Halcyon + Xantus hybrid packages are engineered to ultimately incorporate in-space resource utilization (ISRU) techniques to enable a sustainable space ecosystem. Benchmark’s hydrogen-peroxide (HTP) systems are designed to one day refuel on orbit with propellant created from space ice and water, while the AASC-developed MPTs will replenish in flight with metal harvested from unwanted and problematic orbital space debris – enabled by a set of breakthrough capabilities being demonstrated in space by fellow OSAM pioneers.

“By bringing together Benchmark’s flight-proven chemical propulsion systems with AASC’s unmatched metal plasma thruster technologies, EP expertise and systems, we can now enable missions to arrive on station faster for at least a 10x ROI, with both high thrust and high impulse capability for the balance of operations. This is somewhat analogous to hybrid vehicles here on earth that combine efficiency and range capability, and this partnership supports Benchmark’s OSAM and ISRU ambitions that will accelerate the feasibility and deployment of important space economy initiatives,” said Chris Carella, Benchmark’s Executive Vice President of Business Development and Strategy. “Space exploration and innovation is helping to solve real world challenges on Earth, and Benchmark is dedicated to the development and delivery of sustainable chemical, electric, and hybrid engines to power these exciting new possibilities.”

Satellite operators will no longer have to make compromises due to budget, with pre-integrated turn-key systems they can take advantage of full hybrid propulsion capabilities and functionality at similar total costs to single-system alternatives. Benchmark can increase ROI on any mission, where the status quo for 90% of the market is to compromise and make a choice between speed and endurance.

“Benchmark Space Systems clearly has the team, technology, capitalization and global momentum with its flight-proven chemical propulsion systems, and this strategic merger of Benchmark and AASC capabilities will enable us to ramp up hybrid and cubesat system production to enable upcoming missions,” said Dr. Mahadevan Krishnan, President of Alameda Applied Sciences Corporation. “We are thrilled to be joining the Benchmark team as we leverage the combined innovations of both companies and Benchmark’s DEVO electronics platform to optimize integration and flexibility of electric, chemical, and hybrid propulsion systems to enable current and future applications in space.”

Benchmark announced earlier this year that it has tripled its U.S. production capacity and doubled U.S. manufacturing and technical staff to meet big demand for its Starling and Halcyon chemical propulsion systems. The company has scaled up to build more than 150 systems over an eighteen-month period to enable in-space mobility and maneuverability aboard a spectrum of spacecraft integral to the new space economy and a broad range of LEO, GEO, and cislunar missions.

Benchmark is also close to initiating production at its new UK manufacturing and testing facility in partnership with Satellite Applications Catapult at the Westcott Innovation Centre in Aylesbury, England, home of the UK’s propulsion research and development.

About Benchmark Space Systems
Benchmark Space Systems is a full life cycle in-space mobility provider, delivering products and partnerships from mission planning through decommission. Founded in 2017 to develop green propulsion technologies and flexible product configurations to market, the team’s rapid growth and focus on the development and sustainability of a democratized space domain has resulted in a product lineup of turn-key propulsion systems for 3U cubesat through ESPA and OTV class spacecraft in LEO, GEO, and beyond. Benchmark’s patented and proprietary innovations focus on eliminating customer pain-points and increasing asset value for unparalleled ROI. To explore how Benchmark can help improve your mission, from rapid orbit insertion to advanced RPO (Rendezvous and Proximity Operations)