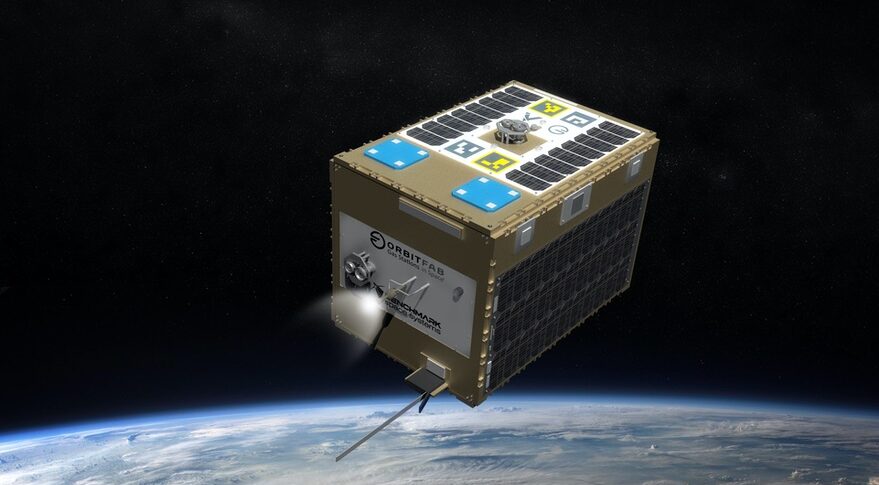 As part of the teaming, Orbit Fab will bundle its RAFTI fluid transfer interface with Benchmark’s Halcyon thruster system to offer an integrated refillable, non-toxic propulsion package. The innovative refueling solution is set for a technical demonstration at the SpaceX launch pad and in space aboard Orbit Fab’s first operational fuel depot to be lifted into orbit on a Falcon 9 later this year.

Benchmark Space Systems will use Orbit Fab’s Satellite Gas Cap™ fluid transfer interface, known as RAFTI, to fuel Orbit Fab’s Tanker-001 Tenzing on the ground. Benchmark will also offer the RAFTI interface as an option with its Halcyon and Peregrine propulsion solutions for in-orbit refueling.

“We expect the bundled high-test peroxide-based propulsion package will become an essential building block for the in-orbit ecosystem for satellite servicing, national security, and space commercialization,” said Daniel Faber, CEO of Orbit Fab. “Together with Benchmark Space Systems, we share a long-term perspective and commitment in order to establish a sustainable in-space infrastructure that enables spacecraft to ‘maneuver without regret.’ And we benefit tremendously from the maturity of the Benchmark propulsion system, which is already flight qualified.”

“Our non-toxic, hydrogen-peroxide fueled propulsion systems provide the thrust levels, precision and control required for a broad range of rendezvous and proximity operations (RPO), and our integration with Orbit Fab’s RAFTI fuel port opens the door to a safe, sustainable infrastructure for in-space mobility,” said Ryan McDevitt, Benchmark Space Systems CEO. “Spaceflight Inc.’s Sherpa Orbital Transfer Vehicle is a great example of the immediate and fielded customer base we see for Orbit Fab’s refueling depots and our HTP propulsion package that opens the door to an exciting new ecosystem in space.”

Orbit Fab intends to operate many satellite tankers with HTP and has agreed to use Benchmark as its propulsion system provider for these future missions.  Orbit Fab’s Tanker-001 Tenzing will store HTP propellant in sun synchronous orbit, where it will be available to satellite servicing vehicles and other spacecraft as they need to be refueled.

Hydrogen peroxide is an environmentally friendly and cost-effective fuel that is particularly effective for in-space thrust and maneuverability. When compared to electric propulsion systems, non-toxic chemical propulsion, such as HTP-based systems, delivers spacecraft to their orbital locations much faster.

Founded in 2017, Benchmark Space Systems is a leading developer and provider of exclusively non-toxic chemical propulsion systems for the small satellite market. The company is focused on providing the most cost-effective propulsions solutions, from rideshare orbit delivery to simple orbit adjustments and high-agility maneuvers. Patented and proprietary innovations have been specifically designed to improve safety and capability for spacecraft ranging from 3U through ESPA class. With 25+employees uniquely experienced and qualified in the development and support of green propulsion systems, Benchmark Space Systems is dedicated to serving the emerging rideshare and OTV markets. For more information, visit www.benchmarkspacesystems.com.

Orbit Fab is a venture-backed startup, established in 2018 in San Francisco, which plans to provide a ubiquitous supply of satellite propellant in Earth Orbit, expanding the operational potential of new and existing space assets. In the future, valuable satellites will no longer be sent to the graveyard orbit when they run out of fuel. Orbit Fab’s goal is to be an important part of the infrastructure that provides fuel and other materials, when and where they are needed, providing unprecedented business model flexibility to satellite operators and increasing sustainability of space assets.